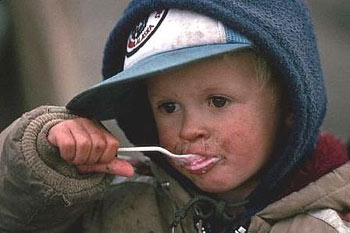 My name is Tom Henry, and I am the Founder of Feed America First. My partner, the late Don Herbert, and I chartered Feed America First in June 2000 because we witnessed hunger in rural America. In the US, the richest country in world history, how could we have neighbors (and their kids) going without food?

The USDA says that even after we send food relief all over the world, (as we should) we still waste about 40% of our food production. So why not feed our neighbors first, before we waste that wholesome food? Why not Feed America First? One out of six Americans faces food insecurity. Even worse, one out of every four children in the U.S. faces food insecurity.

We at Feed America First focus upon our neighbors in need who live in small towns and rural areas, that portion of the 38,000,000 Americans at risk of missing meals while they pay for rent, utilities, or medicine. Our partner agencies are the citizens who want to help their neighbors by operating church food pantries, children's homes, and shelters for the abused, homeless, or recovering. They know their neighbors, and if Feed America First provides them more food, they touch more lives. After all, as I have been told, a loaf of bread given with love by a neighbor has a powerful accountability attached.

Feed America First is in its 20th year of providing food monthly to over 200 small agencies across the Middle TN region. Feed America First has thus far distributed over 130 million pounds of food, and we have done it efficiently: for each dollar donated, Feed America First has historically provided enough food for 10-15 meals. We believe that hunger will cease to be a problem in America when we refuse to allow our neighbors to go hungry.